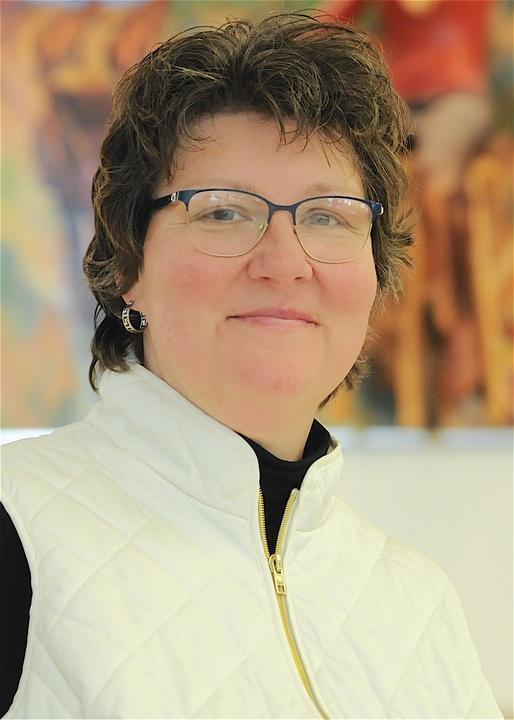 Jeanne L. Fowerbaugh Chandler, 55, a woman of deep faith, passed away peacefully Wednesday, December 23, 2020, after a brief illness.  Jeanne was born April 10, 1965, to Richard and Dorothy (Halloran) Fowerbaugh and grew up in Fort Wayne, Indiana.  Jeanne was wife to her beloved partner in life of over thirty years, Robert P. Chandler and the proud mother of Katherine, John, and Colin, and stepmother to Nathan Chandler.  She was a Professional Civil Engineer, graduating from Purdue University with a Bachelor of Science degree in Civil Engineering. For the last eight years she and her brother, Kurt Fowerbaugh, have been partners in their consulting firm, Journey Engineering, LLC.

During her time at Purdue, she worked diligently to earn her degree and shared the joy of her boisterous personality, playfulness, and wit with all around her. She had many fond memories and memorable experiences and made numerous life-long friends during her four years playing trumpet in the Purdue All-American Marching Band. After graduating in May of 1989, Jeanne immediately began building her stellar reputation amidst the Indianapolis construction community.

Jeanne was an award-winning actress and singer, active in community theater in Indianapolis as an adult, and in Fort Wayne during high school and college, even once traveling to Greece to perform the classic play Antigone in a restored amphitheater on the island of Crete. Theater and music were just a few of the passions Jeanne and Bob shared and was what brought them together when Jeanne moved to Indianapolis after college. They first met and became friends when they were paired up in the Chorus of “Hello Dolly” in the fall of 1989 at Indianapolis Civic Theatre. A year later, while playing the Baroness to Bob’s Captain in the “The Sound of Music” at Civic, Jeanne may have lost out to Maria onstage, but offstage God’s choice for her life partner was confirmed. They were married on December 30, 1993. Both before and after their marriage they enjoyed playing opposite each other on stage. Jeanne’s final stage role was in March of 2018 in “Bridges of Madison County” at Footlite Musicals. This was also the last time Jeanne and Bob played opposite each other when he was called in to play the role of her husband at the last minute.

Another of their joint artistic endeavors was to first perform in, then take ownership of a holiday music production business.  This love of music and theater is shared by Katie, John, and Colin as well, and Jeanne was an enthusiastic band, theater, and PMO mom to all three children attending all the events she could. Jeanne was equally active in sacred music with the choir at Saints Peter & Paul Cathedral, as a cantor at the Cathedral and other local parishes, and as a member of Vox Sacra.

Jeanne spent her professional career working on many of the most notable construction projects in Indianapolis, including the United Airlines Maintenance Center at the Indianapolis International Airport, various portions of Eli Lilly Corporate Campus, and her meaningful role in the construction of the Midfield Terminal at Indianapolis International Airport.  Jeanne had a passion for all things aviation and took great pride in her involvement in each successful project.  But she held a special affection for her “hometown airport”.

Jeanne was predeceased by her father, P. Richard Fowerbaugh and her uncle Monsignor F. Raymond Fowerbaugh. In addition to her husband and children, Jeanne is survived by her mother, Dorothy Fowerbaugh, sister Karen Fowerbaugh of Fort Wayne; brothers, John (Marguerite) of Fort Wayne, Paul (Margaret) of Rocky River, Ohio, Kurt of Indianapolis, and Mark (Kimberly) of Leo; and her uncle Mark (Janet) of Huntington.  Jeanne embraced her role as Aunt to five nephews and eight nieces.

After saying her final goodbyes to her beloved children and husband, Jeanne fell into a peaceful and restful sleep. When she awakened, she found herself in heaven, meeting her Lord and Savior, Jesus Christ, and reuniting with her father, and other family members whom she loved dearly. The heavens will forever echo with the joyous sound of Jeanne’s glorious voice. Visitation for Jeanne will be held on Sunday, January 3rd from 3:00 p.m. until 5:45 p.m. with Recitation of the Rosary at Oakley-Hammond Funeral Home, 5342 E. Washington Street, Indianapolis, IN 46219.  Mass of Christian Burial will be 11 a.m. Monday, January 4th at SS. Peter & Paul Cathedral, 1347 N. Meridian Street, Indianapolis, IN 46202.  Private burial will follow the Mass.  Due to Covid-19 mandate, all in attendance at the visitation Sunday and for Mass on Monday must wear face coverings and abide by social distancing practices.  Memorial contributions in Jeanne's memory may be directed to Priests for Life.